Anyone here using a single pin slider for hunting? Any pros and cons? Looking at Spot Hogg, Montana black gold etc.
Thinking about going with one to get away from the clutter of a 5 pin. But I do have concerns with adjusting the sight to distance when deer are watching, moving etc. other concern is setting to one distance and guessing target point on deer for yardage. I'm sure with practice it can become second nature but will it still allow for longer distances? Thanks for any information.
M

I practice with a single pin set for 30 yards. I then shoot at shorter and longer known distances to see where I hit at that setting. As a general rule I never move that setting while hunting. Repetition shooting will let you know where to aim.
E

I have a Spot Hogg Fast Eddie XL with the double up pin. Top pin is 20 yards and second pin is at about 34 yards without adjusting the sight. Great set up for hunting.

Don't count out CBE. They're my favorite due to zero gear slop. I use Spott-Hogg scope though because pins are tighter an I use the fast Eddie double pin housing. That way when sight is locked on 20 my second pin is 40. 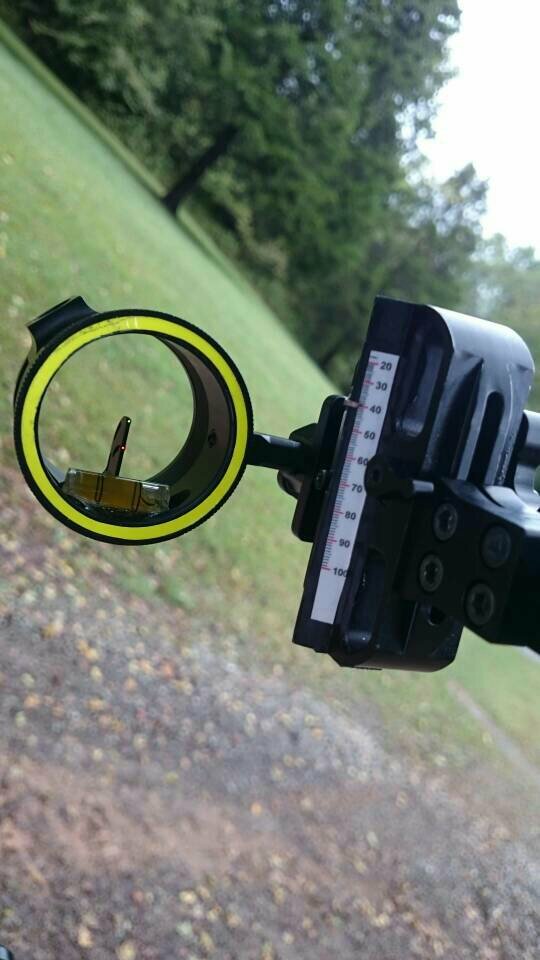 Thanks for the info!

I've been shooting a single pin on my hunting rig for about 5 years now and my only regret is not doing it sooner. Coming from the competition side of the sport, my eyes got very used to seeing a clear target picture with 1 pin and when you stacked 4 pins all together, it started affecting me because it blocked everything.

It isn't as big of a deal as you would think with the adjustments. The main thing is scan your yardage and reference points up in the tree, so you know what is what and how far in advance. From my experience, if you see a deer at a distance, you will have plenty of time to make adjustments and making the adjustments is simple, quick and practically motionless.

There are many sights out there but my favorites are the T.R.U. Ball AccuHunter (with the clicks) and the HHA Optimizer Lite Ultra (Both sights in .010 pin size)—I'll be changing from the HHA to the AccuHunter sometime this year after turkey season. I lean toward the AccuHunter because you can really fine-tune it down to exact yardage, it has quick clicks that you can set to click at certain yardages and with the use of certain programs you can get a tape that will allow you to shoot over 100yds (of course that will be for fun). The HHA Lite Ultra is hard to get an exact tape (it will be a yard or two off at really long distances, which can result in several inches of drop—but that is my competition side coming out and being picky to be honest).

As far as the actual use of a single-pin, I learned a trick from some of the guys I know that shoot in the hunter classes. Shoot a horizontal 1/4" line to do all of your pin setting (this actually works on any sight). Shoot the line at 20yds and set the pin. Then go back to 30yds, without moving the pin or the dial and shoot the same horizontal line. Then measure the drop—it should be 4"-5" or so. Then set your pin to 26yds and shoot from the 20yd line and shoot from the 30yd line. With the pin set at 26yds or so, you will be right in the middle between 20yds-30yds with a 2" drop or raise either way—you'll need to play around with the exact yardage to get the midpoint, but you should be able to get the idea. It will result in a relative flat shooting from 10yds out to 30yds doing it like that and if something is further out than 30yds, you likely will have the time and ability to make the quick changes.