Buckskinner stories - Tales from the hunt

Went very well for us in Colorado! 2 doe tags and a buck tag were filled. We had 2 cow elk tags, but due to the heat, we were unable to find them and decided to pull out 2 days early and get all the deer processed. We did all the processing ourselves and ended up with 163lbs of yumminess!

Morning - First day - Dad,brother and I wait and wait and wait until a deer starts to present itself. A solid 10 minutes and as my dad is getting ready to take a shot at a doe, another one pops out of no where and steps in front of us as 20 yards! I excitedly said, Take that one instead! He popped her off with a high and slightly behind shoulder shot. She dropped on the spot. 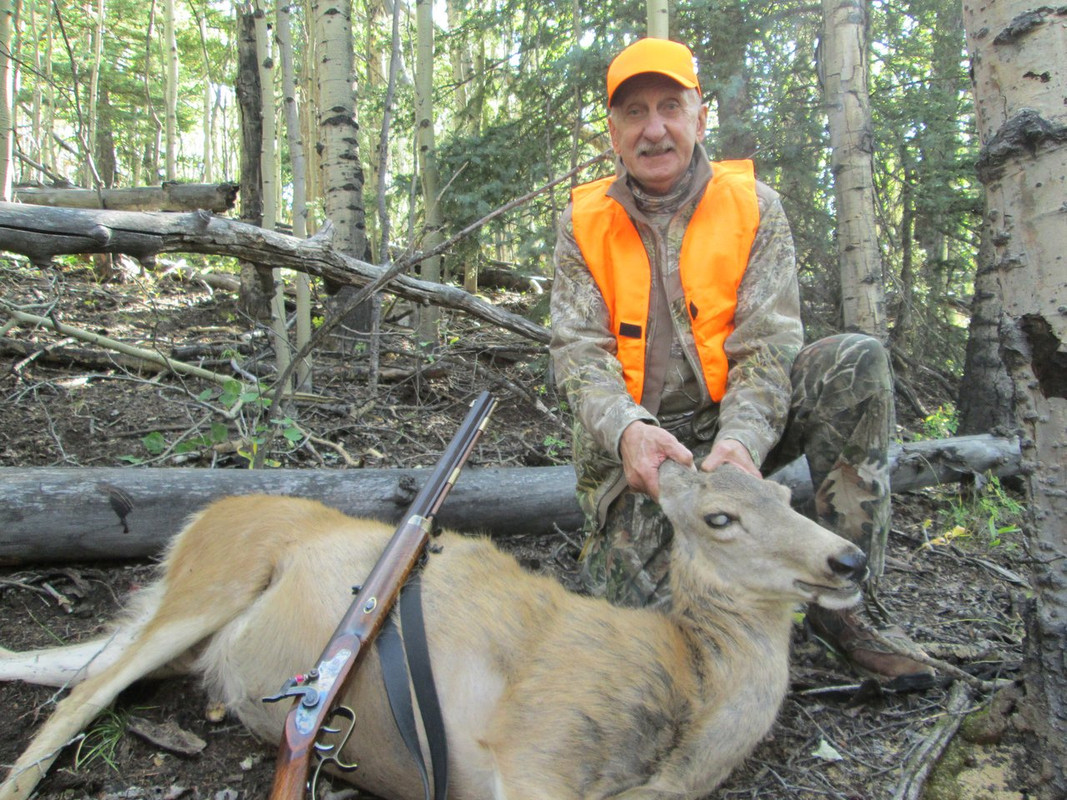 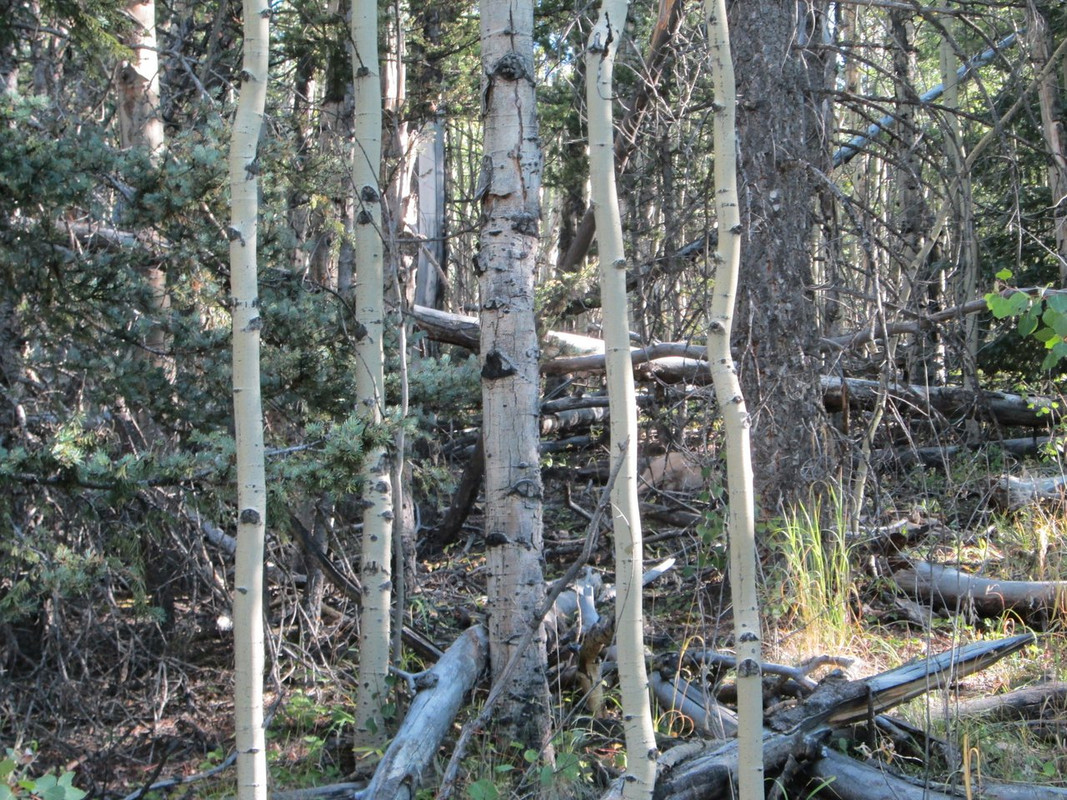 What we found behind her, 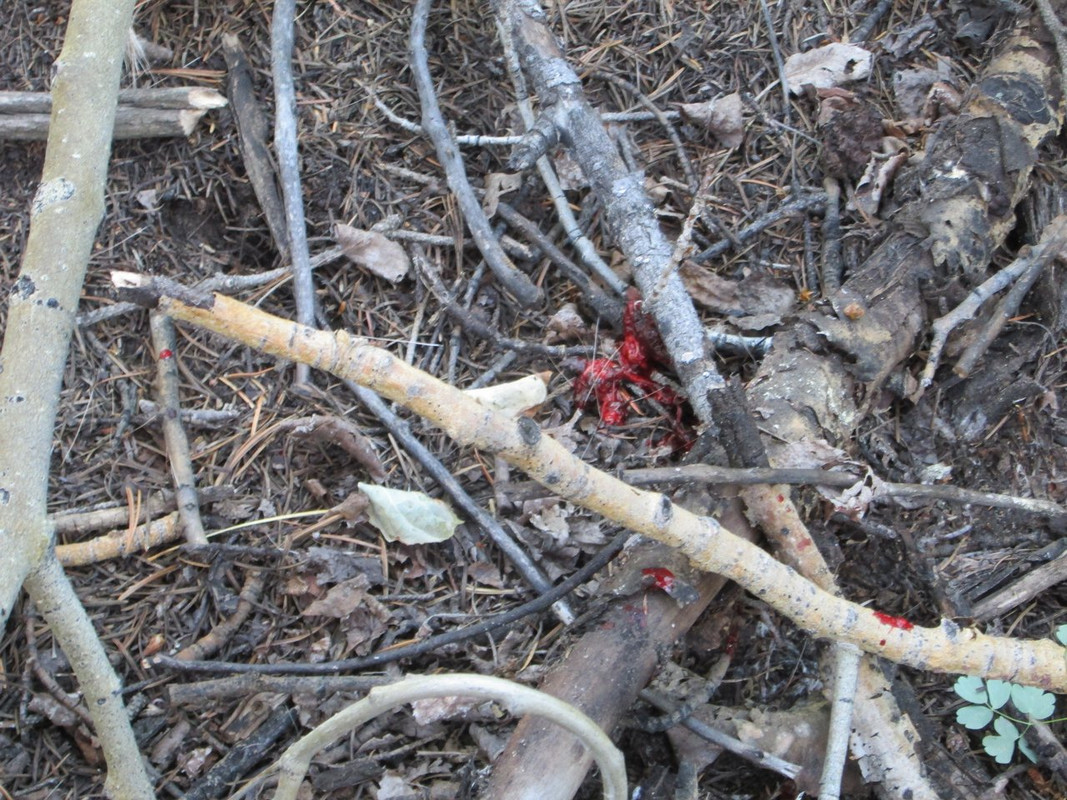 Evening - First day - We all went looking for elk and spent some time calling in the thick timber until I said lets go ahead and head out to another spot so we can see about filling my brothers doe tag. Along the way, i was stopping and taking pictures... 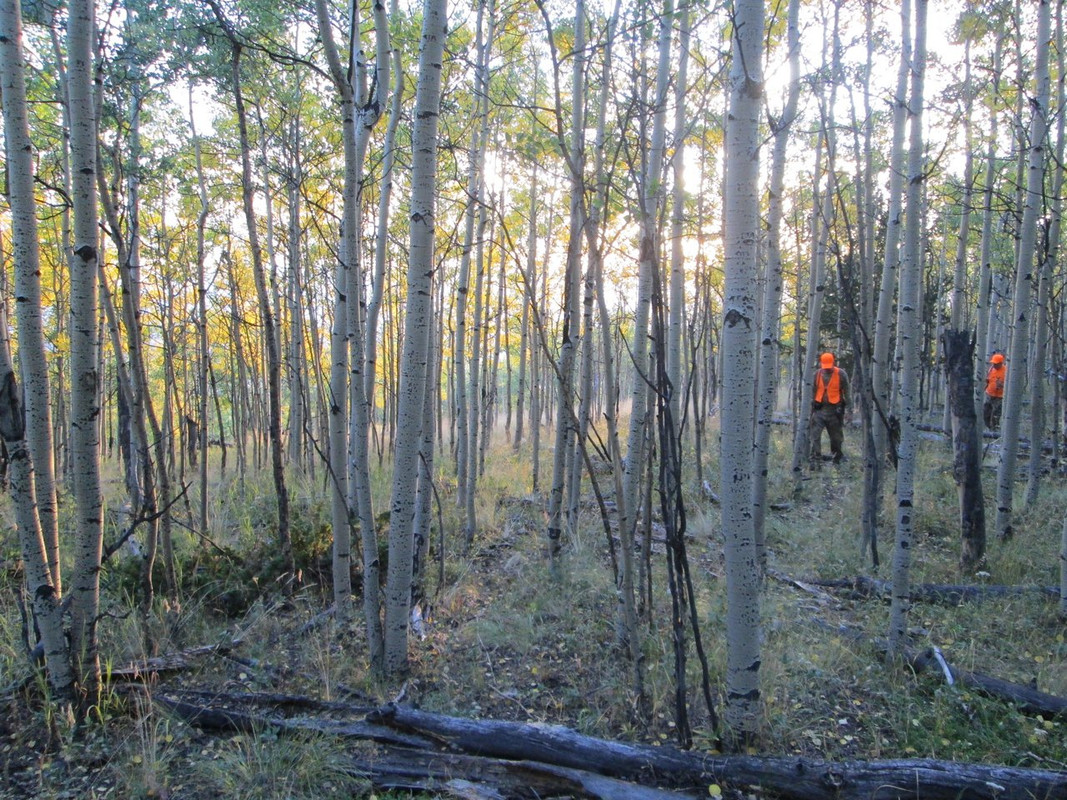 Putting my camera away, we slowly proceeded and I got a head of the group a little bit while breaking trail.

I was scanning a little beautiful valley below and out of the corner of my eye, a spike buck comes trotting by at maybe 40-45 yards? I got ready, and another buck pops out trotting by! He was a wide and tall 2 point ( forkie ) and I was thinking, He'll do! But then a beautiful velvet 4x4 ( unknown to me at the time ) comes running out, starts a slow trot. I whistled and he slowed down to a more manageable pace. I squeezed the trigger, saw a little reaction out of him as he really slowed down, but didn't really stumble much. I thought, Ah hell! How could I miss!!!

I took my time and slowly reloaded, listening at the same time. I drove the patched round ball down onto the powder and as I was capping, the two other smaller bucks came hauling tail back down into the little valley. They were running hard and then came to a full stop, turned to face the mountain where they had just come from, and just stopped cold turkey and stood there staring.

Do I shoot that big forkie and pray I missed the first one? I decided, since those two bucks were watching back up the way they came, either that big boy is coming down to join them, or hes dead. No way in heck I'm going to be foolish and shoot another buck just because the original deer I shot at isn't there.

It's a good thing I did not! After about 6 to 8 minutes, both bucks bolted and took off. I gave hand signals to the others to stay behind, I'll go check around down there for sign.

I hiked down the gentle slope, slipped into some aspen and pines and started to search out the ground before me. I slowly scanned, spotted an odd colored rock or dead aspen tree on the ground. Never get fooled by those things folks! Every time you are looking for game, branches look like antlers, trees or rocks look like deer. I made my way closer to it and let out with a howl and told the others to get down here! Hes big!

My shot hit true! A 1/4ing away shot that hit far back ( but well into the lungs ) and exited out the opposite shoulder! His lungs were black jelly upon gutting him out. 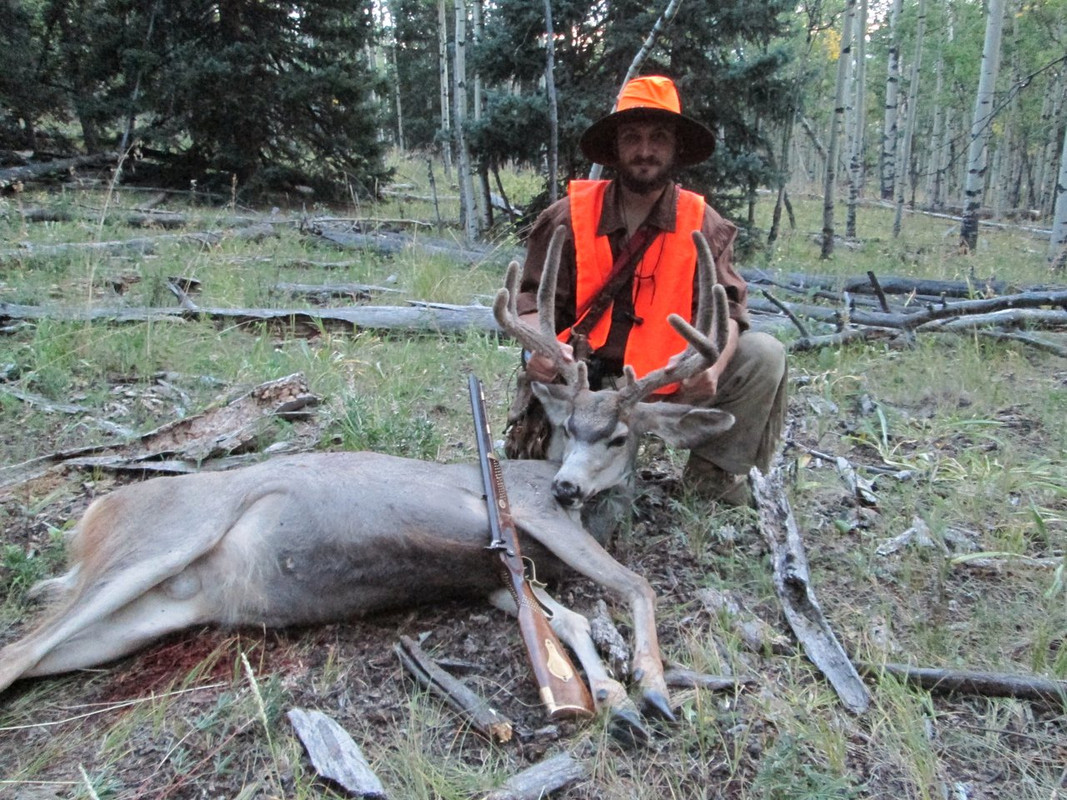 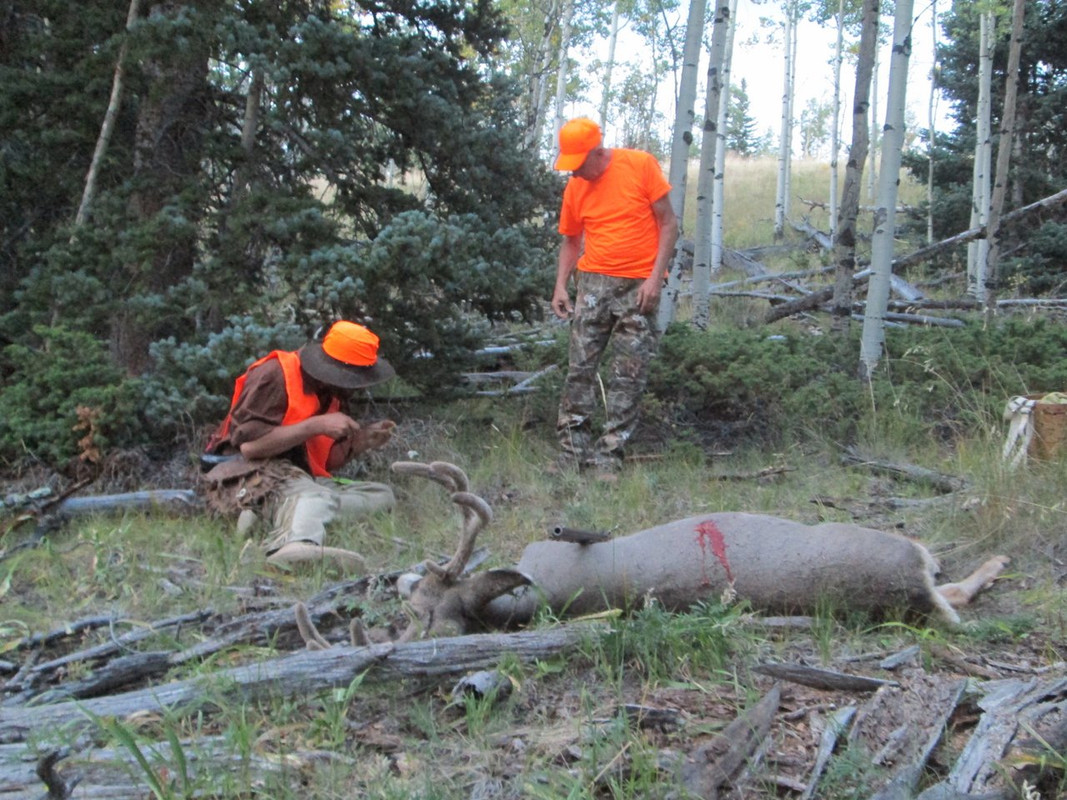 Day 3 - Morning - My brother, dad and I are slowly walking a trail and just lightly chatting, when we run into a group of muleys, 4 or 5 in total with 2 bucks! I can't believe how many bucks we ran into on this hunt! My brother still had his doe tag to fill and he took a knee, readying for the shot but was unable to see his front sight due to the lighting in the aspens the deer were feeding in. We all got a little agitated of course, we waited and tried to get into a different position for the shot, but they spooked and took off. Huge bummer! My brother and I did a little walk to see if we could still see them since they ran off into an area that had been cut/burned out last year.

We all were really bummed. Early morning hunt, easy deer to take at 50 yards or so.... We got all packed up and continued down the trail and maybe 100 yards down the trail.. Deer!! Take the big doe! My brother took a knee, asked me to make sure it was a doe and after I confirmed that it was, he stroked the trigger and through the cloud of white smoke, I saw the doe stop in her tracks. The doe was 1/4ing toward us and so he placed it just right of the breast/collar bone and she dropped in her tracks, down for good. He was horribly heavy to drag back to the main trail where the atv's were. I found a dead aspen and I chopped it down with my mouse hawk and we tied it to get legs and carried her out. It was an extremely painful way to carry a deer out! Looks easy in the cute movies, but not when you've had neck surgery in the past.

One big plus however, zero dirt or mess inside by carrying her. Once we got close to the atv's we grabbed a tarp and game bag and boned out the meat in the field. Heart and liver from all deer was taken back home to eat, as well as the hides to make a new jacket out of eventually. 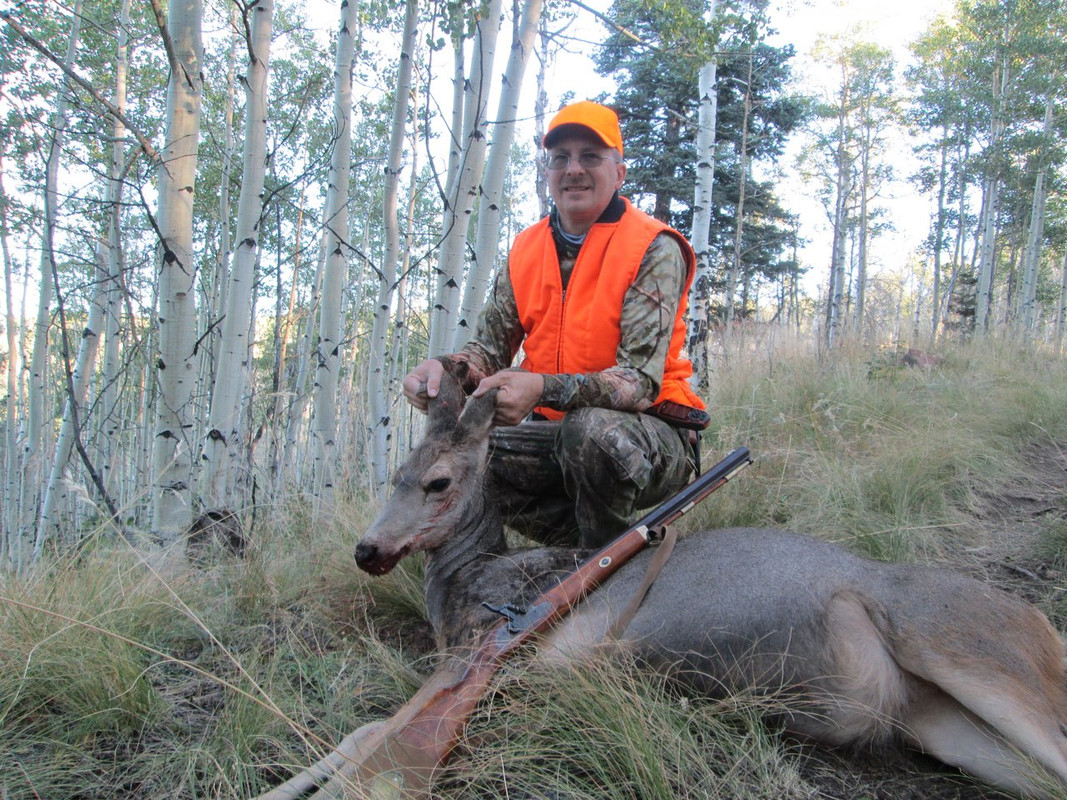 The mouse hawk and my brothers custom made ( he made it himself ) damascus skinner, made easy work breaking the deer down! That hawk especially, puts a saw to shame. 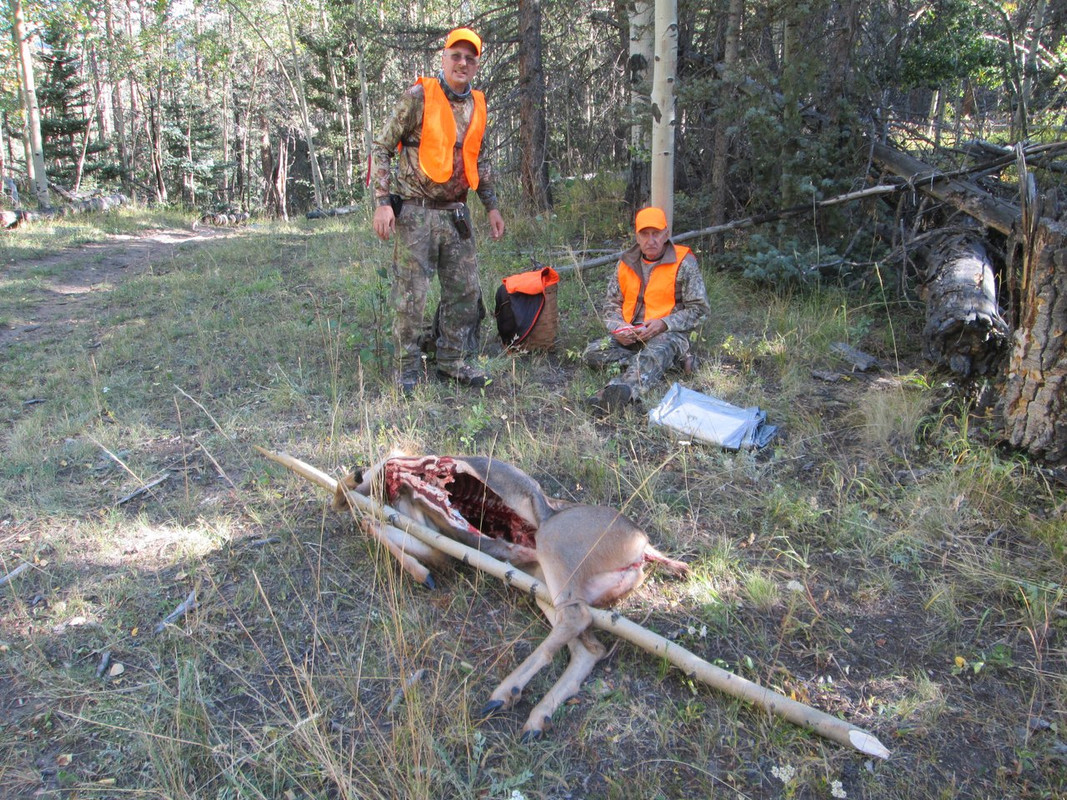 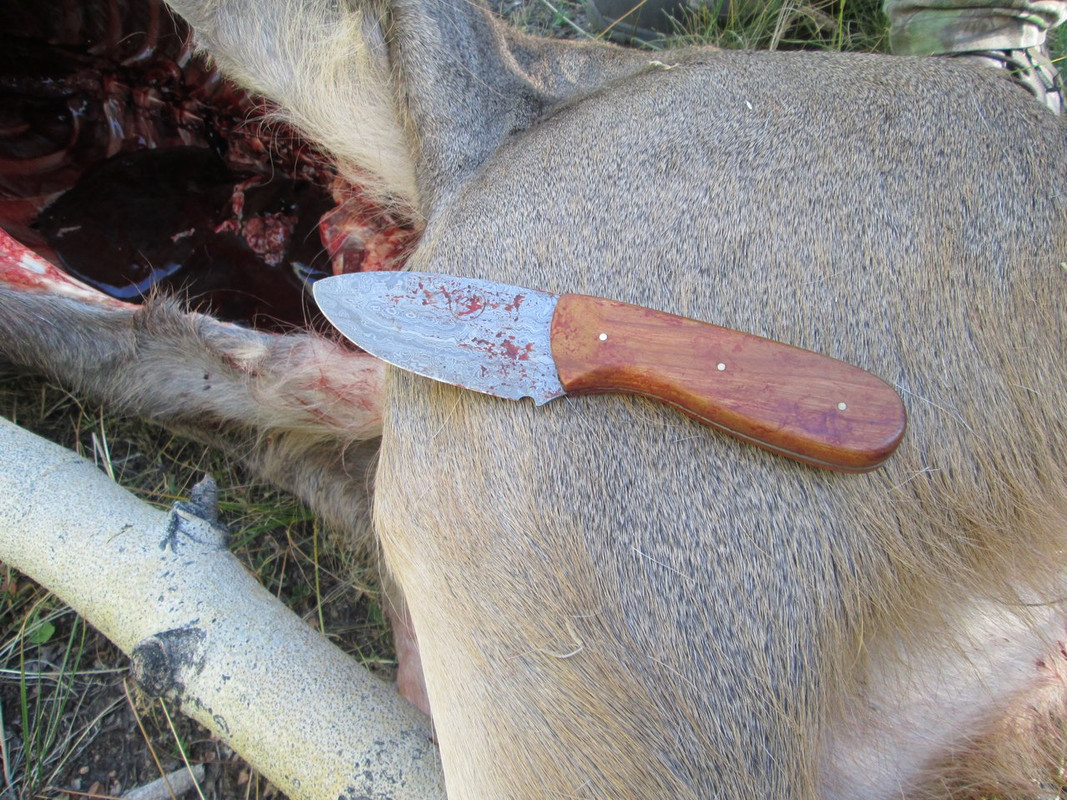 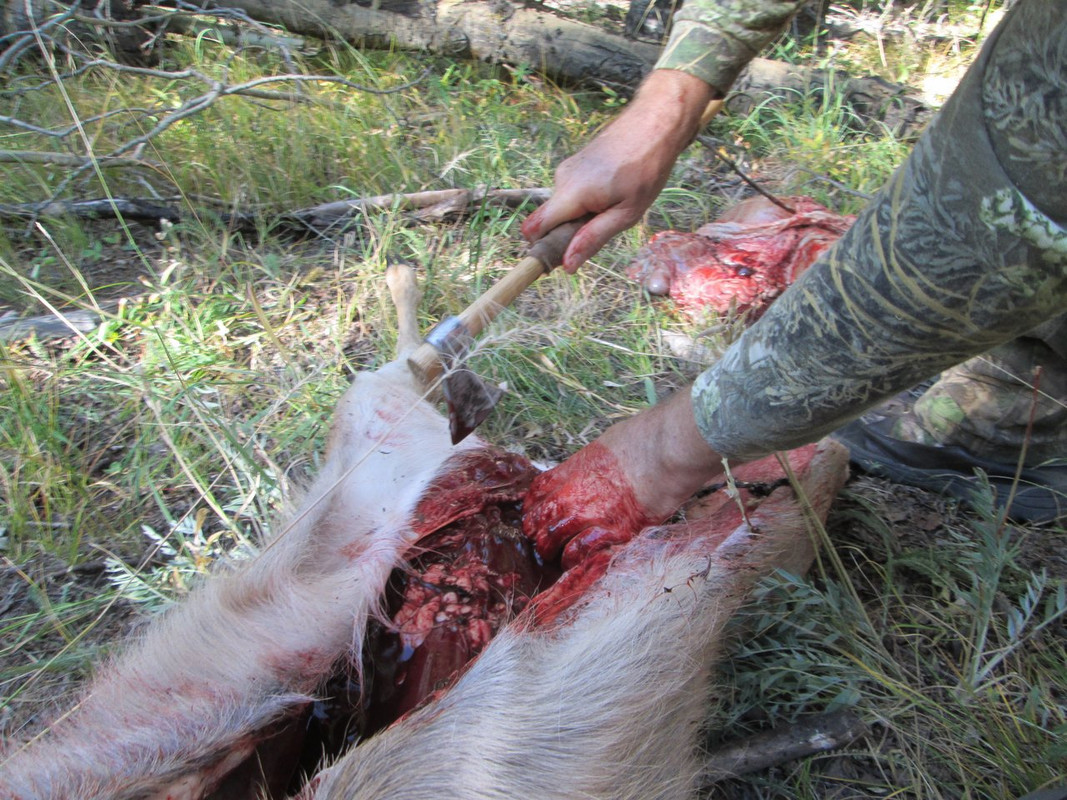 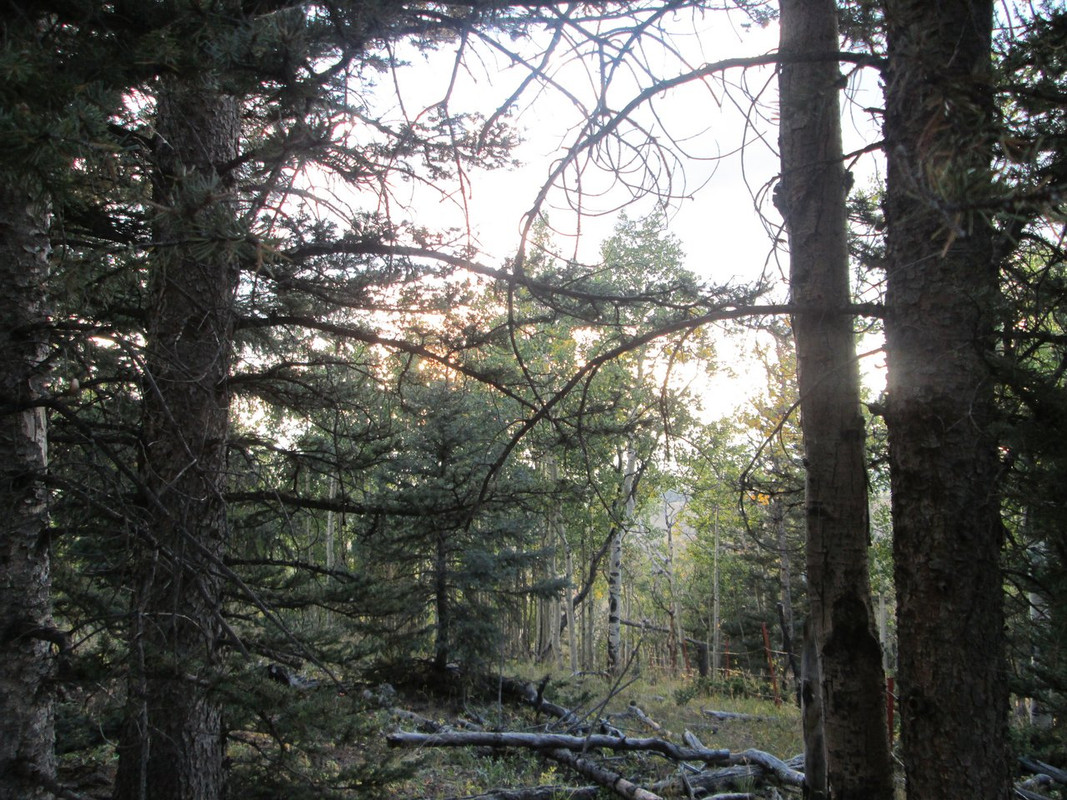 Wow! Incredible hunt and time spent with family. Love the traditional approach. I can smell the powder! Congrats man!

Awesome story and pictures!
Congratulations to you all!

Phenomenal thread! Congratulations on an incredible hunt and even better experience!!
B

Blast from the past

1.5" Groups from The Accura

Blast from the past patch lube